The start time is 10 am!! Meet as usual at the top of the Park Street steps. Morning tea will be provided (contributions welcome). Hope to see you there.

The Thorndon Residents Association and a number of Thorndon and Wadestown residents have been working with the Wellington City Council towards rejuvenating Queens Park which, since its formation over 120 years ago, has become sadly neglected over the past couple of decades.

There are Working Bees held approximately monthly where parts of the park get some much needed attention to clearing and tidying. Keep an eye on this page for the dates of these.

In December 2019, there was a Workshop with Cheryl Robilliard of PAOS which discussed potential improvements and upgrading for the Park. The summary sheets presented at the Workshop are shown below.

If you want more information about the Park, want to be included in the email notification list for the Working Bee group or have any comments on the improvements shown below, please contact Peter Steel at peter@steelfamily.nz or ph: 021 244 850.

Saturday’s efforts exposed an area where we can move on to doing some planting, rather than merely weeding and other maintenance. We’re inviting people to sponsor a plant or two. For more information please contact Peter Steel at peter@steelfamily.nz or ph: 021 244 850.

Before/after shots that illustrate the progress made: 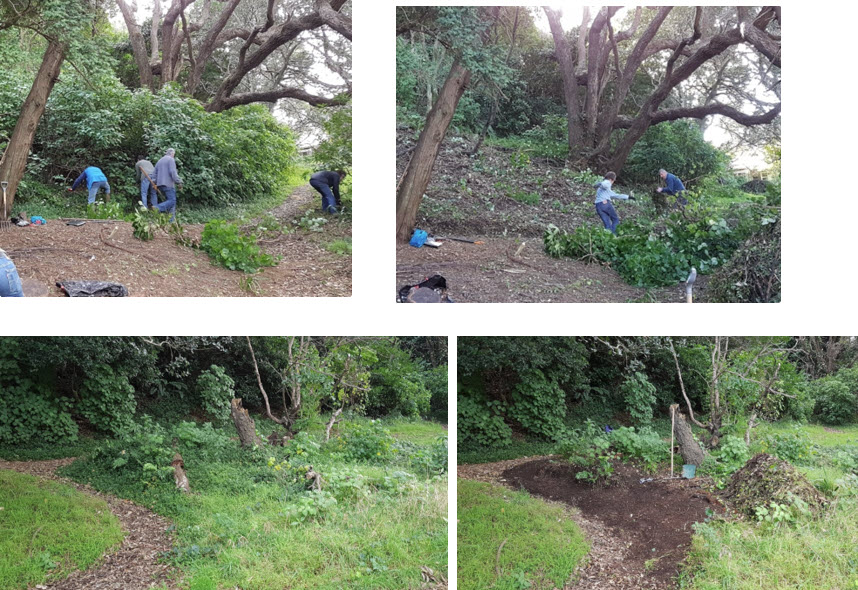 Progress made at the last working bee held on 24 February – our first for 2020.

This environmental weed, originally from South America, causes major problems under trees and in bush reserves. It forms thick mats of vegetation in moist, shady areas within bush reserves which stop new seedlings of trees and shrubs from establishing. It can also cause allergic skin reactions in dogs and other animals running through the foliage.

Tradescantia can be difficult to get rid of once established. But as can be seen in the photos the working bees have made significant progress on verges of one of the lawns.

Queens Park has deteriorated significantly over the past 20-30 years, with the Council undertaking only minimum maintenance and limiting the area of the Park which they maintain. Establishing the Friends of Queens Park is one key initiative to show that the community is concerned at this lack of maintenance and want to see an improvement in the state of the Park.

The Council have clearly taken notice of the community interest in the park – there has been substantial clearing of undergrowth and mowing of the lawns done since our first Working Bee on 8 June 2019. They have been held since then at approximately monthly intervals.

These make for very pleasant morning outings. You gain additional insights to this asset on our doorsteps and meet others who also care about it. Your contributions reap immediate rewards as you see what changes can be made over 120 minutes. And it’s great to meet others with a natter over a cup of tea/coffee (usually around 11AM).

Since our First Working Bee in June 2019 progress has been made on:
• clearing tradescantia/wandering willie and other weeds from a strip along the lower edge of the lawn north of the Park Street steps,
• tidied the path at the upper edge of this lawn and
• cleared more of the former lawn area north and adjacent to Grant Road.

There is still lots of work to be done – picking up rubbish, trimming back the undergrowth that intrudes onto various tracks, and further on clearing of areas that used to be lawn and have become covered in tradescantia (wandering willie) and other weeds.

Please email Peter Steel at peter@steelfamily.nz or phone 021 244 1850 if you are interested in becoming involved.

THE BEGINNING OF THE QUEENS PARK WORKING BEE INITIATIVE

There will be very few people who know much about Queens Park – the oldest of Thorndon’s parks, developed in the 1890s from a bare area of Town Belt.

The Wellington City Council named this part of the Town Belt “Queens Park” to commemorate Queen Victoria’s diamond Jubilee in 1897. The Queen would now not be amused at the park’s state and the neglect that it has suffered over the past decades.

This could be an amenity area with its network of paths and park areas, for use by residents of Thorndon, workers in Thorndon and the CBD, plus those Wadestown/Wilton residents who walk into the city. At present it is neglected and, without signage, unknown and largely unused. It is time for the park to be restored and I seek support for this from Thorndon Society and Thorndon and Wadestown Residents Associations.

Queens Park is not just the planted corner of Wadestown Road and Grant Road. This area was developed as a garden in the early 1950s in conjunction with the installation of the Nathan Memorial Fountain and was named “Lady Macalister Garden” in 1961, after the wife of the former mayor Sir Robert Macalister.

Queens Park extends north from Lady Macalister Garden and runs between Wadestown Road and Grant Road/Grosvenor Terrace, from Park Street north to the properties on the south of Orchard Street. The park surrounds the properties occupying Town Acres 661, 662 and 663 on the western side of Grant Road.

The park area and original paths are shown in a 1915 map below:

In the 1890s this area was a Victorian promenading park, with planting of exotic trees, shrubs and hedges, with formed paths and entry gates. In the gorge below Wadestown Road and Orchard Street the stream and waterfall would have been a significant feature, reflecting the Victorian interest in wild landscapes. The park was originally planted with conifers and pine trees of various species as well as European deciduous trees, reflecting the ornamental and plantation planting fashions of the time. In the 1940s as some of the conifers matured, a number were removed and replaced with new planting – largely deciduous and native species.

The park still has some very notable deciduous trees – including oak, lime and silver birch trees, along with mature conifer and pine trees, but tree management has ceased so some of the trees are deteriorating and becoming crowded making the tracks through the park dark and unsafe feeling. Overcrowded, dead and fallen trees are readily visible from Grant Road.

Some elements of the reduction of Council attention to the park have been:

It is time to seek a halt to this progressive decline and neglect of the Park. There is a model for the renewal of the park in the work undertaken since 2005 to Central Park in Brooklyn, which involved a Restoration Plan to set the vision for redevelopment and also involved the establishment of a community group – the Friends of Central Park.

The mature European trees and conifers in the park are a distinct feature which is very different to the wider Town Belt – a feature that is not mentioned in the current Town Belt Management Plan. The restoration of the park should recognise and support the retention of these, rather than seeking the regeneration of native forest which is being undertaken to replace the pine plantations on Te Ahumairangi Hill.

There are a number of forthcoming key anniversaries related to the establishment of the park which would reflect a revival of interest in the Park:

I would appreciate it if the Residents Association would consider supporting this initiative and encourage the Council to restore Queens Park into the valuable community asset that it could be – something that we can use and enjoy.